Tract - This Was Your Life by Jack T. Chick

Tract - Why Is Mary Crying? by Jack Chick

Tract - I See You! by David W. Daniels

Comic Pack - Alberto Comic Series Volume 1 - 6 plus the testimony of former priest Charles Chiniquy and the history of the Jesuits
€21.40 €18.00 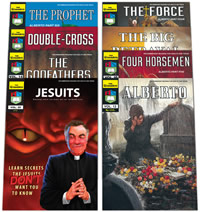 Testimony of a former Jesuit priest

Alberto Rivera was a Jesuit priest. His job: infiltrate Protestant ministries and destroy them. But one day, while reading his Bible, he came face to face with the truth... salvation doesn't come through good works and the sacraments. It comes only through faith in Jesus! Obeying the Scriptures, he placed his faith in Christ alone and left the Roman Catholic Church.

In this collection of full-color comic books, Rivera tells his story, and reveals how the Catholic Church has manipulated history in her drive to rule the world. You will see how she helped start World Wars I and II, her place in Bible prophecy, and even how she was involved in the startup of Islam, which later turned against her in rebellion.

This value pack includes 6 books based on the testimony of Alberto Rivera, plus an extra bonus...

Jesuits - Read the fascinating history of the Jesuits, learned from their own writings. By the end of the story, the reader will understand that he cannot put his complete trust in any church, religious leader, or anyone else for his eternity. He must place his faith in Jesus alone.

Big Betrayal - The story of another priest, Charles Chiniquy, who was nearly destroyed when he rebelled against the Catholic Church, until a young lawyer named Abraham Lincoln defended him in court.

Alberto, Double-Cross, The Godfathers, The Force, The Four Horsemen, The Prophet, Jesuits, The Big Betrayal